With just six weeks to go until the Olympics, the women's gymnastics team is looking less like a team with every day that goes by. Coach Mac is determined to whip them in to shape, the way he did when he was head coach of the Men's team. The only problem is the girls are not responding to his harsh tactics and even worse, not improving. With a frustrated team and the NGO looking over his shoulder, Coach Mac is desperate to turn things around. Meanwhile, Payson is still plagued with the Sasha kissing scandal - even at the USA Training Center.

Now there are only six weeks remaining until the Olympic team is decided and everyone is feeling the pressure. The girls are still working with their assigned training partners, but they find that they are lacking the much-needed positive reinforcement from Coach Mac. All Coach Mac ever does is yell and criticize the girls, and they're starting to wonder if he has what it takes to coach the Olympic team. It turns out that the NGO is having their doubt about Coach Mac, too, and they send Marcus over to the USATC to observe the team. Marcus finds that the team is falling apart and that the girls all appear to be scared of Coach Mac. After Payson secretly voices the girls' concerns to Marcus he tells Coach Mac that he has 48 hours to make some changes or the NGO will replace him. Coach Mac doesn't understand what he's doing wrong since he's been using the same training tactics he's always used when coaching the men's team. His wife, Annie, reminds him that girls respond to things differently than boys, and that he should keep that in mind while he's coaching them.

Meanwhile, Payson is upset that people are still bringing up the "kiss scandal" that happened between her and Sasha last year--especially after it comes up during an on-camera interview. Kaylie and Lauren try to re-assure her that it will eventually fade out of peoples' memory and that she just has to stay focused on her training. The girls abruptly stop talking when Kelly comes over, and Kelly feels ostricized from the group. Kaylie tells her later that they weren't talking about her and that it was just a coincidence that the conversation stopped. She tells Kelly what they really were talking about and Kelly offers to ask her mother to find out who sent the tape of Payson kissing Sasha to the NGO. Kaylie is reluctant at first but eventually agrees that they must find out the truth. When it comes back that it was actually Lauren that sent in the tape Kaylie doesn't know what to do. She's afraid to tell Payson because she knows it will crush her, but at the same time she needs to know the truth.

Payson has other problems as her budding relationship with Rigo seems to be unable to get off the ground due to their hectic training schedules. Payson wonders if Rigo is even into her at all, but Lauren assures her that he wouldn't be putting in all of this effort if he wasn't. Rigo finally asks Payson out properly, but she can't go because Coach Mac calls a last-minute team meeting at his house for the same time. Rigo can't reschedule because he's leaving later that same night for an out-of-state meet and won't be home for at least a week. They're both disappointed, but agree to at least change their relationship status online to "dating".

At Coach Mac's house, Annie is trying to help him see that his training methods still need a little tweaking if he's going to reach the girls, but he won't listen. He makes the girls watch training footage while he criticizes every little thing in front of the team, then makes them watch "Remember the Titans", because that's what the men's team likes to watch. He leaves the room and that's when Jordan starts trouble: she calls out Kaylie for having a secret she doesn't want Payson to know. Since everyone knows that Jordan is the one who's been ratting everyone out to Coach Mac, no one believes her. Jordan keeps trying to tell everyone that Kaylie is two-faced and will abandon her friends when she no longer has a use for them, and that's when it comes out that Lauren sent the tape to the NGO. Payson is crushed and runs outside, with Lauren following right behind her. Payson tells Lauren how much the tape her both her and Sasha, and Lauren only says that she did it to keep Summer and her father together. Lauren begs Payson to forgive her, because for the first time in her life she knows what it is to be a real friend and she's trying to mend her ways and be a better person. They go back into the house in time for Coach Mac to see that he tactics have not worked at all. Kelly speaks for the group and tells him what he's been doing wrong. Coach Mac finally sees that he needs to treat the girls differently and together they all start to work together as a team for the first time. Marcus likes what he sees the next day in training and tells Coach Mac that he can stay.

Payson tells Lauren later that night that if Lauren truly wants to be a good friend that she has to start trusting people--starting with being honest about what's really going on with her dizzy spells and fainting. Lauren admits that she really doesn't know what's going on and has been scared to go to the doctor to find out. Payson promises to go with her to the doctor so she doesn't have to be there alone. Lauren asks Payson to keep this between them, because she's afraid that if people find out that she's sick she might get sent home. 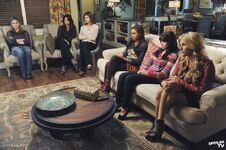 Add a photo to this gallery
Retrieved from "https://makeitorbreakit.fandom.com/wiki/Time_is_of_the_Essence?oldid=6426"
Community content is available under CC-BY-SA unless otherwise noted.