Lauren is devastated when the doctor tells her that her heart condition requires surgery. In hopes of helping her, Payson tracks down another doctor to convince him to perform an experimental procedure with a quicker recovery period. Meanwhile, Kaylie is forced to room with Jordan.

Lauren and her father are meeting with Dr. Lim about her options with her heart condition. Dr. Lim explains that Lauren's condition is very serious and quite rare, requiring open-heart surgery. Lauren asks if there is any way she will be able to get back to training, and Coach Mac says that she will not be able to keep training for the 2012 Olympics. Dr. Lim tells her that she will need months of rest before she is able to do anything physical, and training is out of the question. Mr. Tanner says that there is another doctor, Dr. Walker, who does non-invasive heart surgery, but that he won't see Lauren because she's an athlete, and athlete's hearts are more difficult to work with because of the stress they undergo from high-level training. Lauren says that if the Olympics are no longer in her future that she doesn't care if she ever gets well, and refuses to see anyone. Summer even flys in from Miami to give her support, but Lauren doesn't want to hear about how God has a plan for her. Payson finds out about Dr. Walker and decides to go on a road trip with Rigo to go talk to him and convince him to perform Lauren's surgery. Payson tells Coach Mac that she's doing Power Grrl Bar endorsements and he allows her to go.

Payson and Kaylie feel bad that they have been shutting out Jordan because they thought she was the one ratting them out to Coach Mac, so they apologize to her. Jordan doesn't buy it, especially since Wendy has started telling Jordan nasty things about Kaylie. Wendy feels that if she can get Jordan, Payson and Kaylie to hate each other that their training will suffer and she'll be the top girl in the gym. Wendy's plan backfires on her after Jordan and Kaylie decide to talk out all of their hurt feelings and start fresh. Kaylie confides in Jordan about Payson's road trip with Rigo and Jordan offers to cover for her with Wendy. While Jordan is pretending to be Payson sick in bed Wendy starts bad-mouthing Jordan, and Jordan calls her out on her lies later that day when they're alone.

Meanwhile Austin has hurt his shoulder while doing an iron cross on still rings, and he's worried that this will cost him his spot on the men's team. Kaylie assures him that he has nothing to worry about and offers to help him after practice. Austin doesn't want to take the iron cross move out of his routine, so he decides to change one of his tumbling passes on floor to reduce stress on his shoulder. Kaylie tells him that the new pass looks great and he agrees to perform it the next day for the selection committee. However, when he does perform it for the committee they don't ask to see his rings routine and end up cutting him from the team. Austin blames Kaylie for making him take his flashier tumbling pass out of his floor routine, even though it was his decision and she was just trying to be a supportive girlfriend. Austin tells Kaylie that their relationship is over, because she "distracted" him from his goal of going to a second Olympics. Kaylie is crushed when Austin leaves the USATC without even saying goodbye, just leaving a small box of her things behind in his room.

Payson tracks down Dr. Walker at a remote retreat in New Mexico and sneaks in to talk to him. Dr. Walker explains why he won't perform the surgery on an athlete because it's too risky, and Payson begs him to reconsider. When he refuses again she tells him that she thought he had more courage than that, and that she's sorry she believes in him more than he believes in himself. After hearing that, Dr. Walker decides to make the trip up to Colorado to see Lauren himself. Payson is ecstatic when Lauren finally asks to see her, which is when Dr. Walker arrives and Mr. Tanner thanks Payson for going to talk to him, and caring so much about Lauren's health. Lauren apologizes for being angry with Payson, and Payson reminds her that she's there for her no matter what. 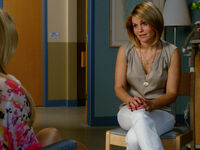 Add a photo to this gallery
Retrieved from "https://makeitorbreakit.fandom.com/wiki/Listen_to_the_Universe?oldid=6594"
Community content is available under CC-BY-SA unless otherwise noted.