Coach McIntire decides to pair the girls up to teach the lesson that, while gymnastics is a single sport, they won't make it to the Olympics alone. This is not a training technique the girls were expecting, especially when Lauren and Payson are paired up and Kaylie is slotted with Kelly Parker. Still stinging from Kelly's betrayal before, how can Kaylie possibly live with this girl, let alone trust her? And Payson and Lauren are polar opposites, so how can they possibly agree on anything that can put them on the right track? Meanwhile, Austin pushes Kaylie to consider a career after the Olympics.

Just as the Rock girls are calming down after being forced to burn their team jackets Coach Mac has a new surprise in store for them: training partners. He teams up every girl at the camp with a new permanent training partner, and even makes the girls room together so they can eat, sleep, and breathe gymnastics together. Jordan and Wendy, Lauren and Payson, and Kaylie and Kelly Parker make up the notable teams. In another twist, Coach Mac tells everyone to choreograph a floor routine for their partners within two days, with the last-place team being sent home. Since no one is particularly thrilled with their partner, this becomes an even bigger challenge in trust and teamwork--which is just what Coach Mac intended from the beginning. When the nutritionist questions his choice ofkeeping Lauren and Payson together even though they alreadyknow each other, he replies that he suspects that with Kaylie removed from the group that the Rock girls would crumble.

Meanwhile, Lauren decides that the only way to get Payson out of her funk over her breakup withMax is to set her up with someone new. After running around campus trying to find a potential date, she runs into Brad and Rigo, who are on the BMX biking team.Lauren stills finds Rigo repulsive, so she asks Brad if he would pretend to "stumble into" Payson at the coffee cart tomorrow at 3pm. Brad remembers meeting Payson at the mixer the other day, so he agrees,saying that she was hot. However,the next day Coach Mac decides that the girls will have tostay and do an extra hour of conditioning, so Lauren has to run out to find Brad to tell him the "date" has been pushed back to 4pm. When she can only find Rigo she asks him to pass the word on to Brad. Rigo seizes this opportunity to get to know Payson and never tells Brad about the time change,instead getting Payson's attention by doing some stuntson his bike by thecoffee cart. Payson likes what she sees and the two spend the afternoon together.

Austin tells Kaylie he lost one of his sponsorshipsbecausehe's nolonger a player, so he's exploring new ways to bring in money. He signs them both up for an on-camera broadcasting class and tells Kaylie that they'll be just like Bart and Nadia after the Olympics with a long career in gymnastics commentating. But it turns out thatit's Kaylie, not Austin, that's cut out for being on camera, so Austin gets discouraged about his future prospects after the Olympics.

Jordan is still trying to stir up trouble in the gym and tries to "warn" Kelly about Kaylie's attitude and back-stabbing. However it's Kaylie that's worried about Kelly, as she's been known to snoop and steal things from her in the past, and that causes more tension between the two. When it comes time for their routines, Kelly lies about how well she's mastering the moves and Kaylie thinks her routine is too simple and changes it to her liking. Because of that obvious showing of mistrust Coach Mac drops their ranking down to fifth place. Lauren and Payson do very well and move up into second, and Jordan and Wendy move into fourth. Lauren also lies about her health and covers up her fainting spells so she doesn't get taken out of training, and therefore, her Olympic dreams.

That night Lauren is helping Payson get ready for her date with Rigo when she lets it spill that she set the whole thing up--with Brad. Payson is hurt either way and storms out of the room, telling Lauren to keep out of her life. She finds Rigo and yells at him for pretending to like her, and he tells her that he liked her all along--that's why he never told Brad about the time change so he would have the opportunity to meet Payson himself. Realizing that Rigo has genuine feelings for her, Payson agrees to keep seeing him. She goes back to the room and apologizes to Lauren. In Kelly and Kaylie's room they're also having a heart-to-heart, and they agree to leave the past where it is and start fresh. 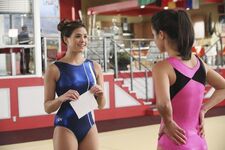 Add a photo to this gallery
Retrieved from "https://makeitorbreakit.fandom.com/wiki/It_Takes_Two?oldid=6428"
Community content is available under CC-BY-SA unless otherwise noted.