Nervous that she'll have to play referee to her bickering, divorced parents, Kaylie decides to bring along boyfriend Austin to their family dinner, but starts to regret it when Austin and her dad get along too well. Payson is shocked when her dad delivers some unwelcome news. And Sheila does her best to sell Coach McIntire on Kelly. Meanwhile, Payson pushes Lauren to see a doctor about her condition.

Coach Mac has arranged a Family Day exhibition to help get the girls focused for the up-coming Olympics. His strategy is that it's hardest to perform for the people closest to you, so he has the girls invite their families to come to the USATC for a few days. He gives each of the girls a special routine to perform that will illustrate the history and evolution of the sport: Jordan as Nadia Comaneci (ROM), Payson as Svetlana Khorkina (RUS), Lauren as Olga Korbut (USSR), and Kaylie as Mary Lou Retton (USA). Jordan complains that her Nadia routine is too old-fashioned and dance-filled for her tastes, but Coach Mac insists that it will help her to step out of her comfort zone.

Kaylie is stressed out that both of her parents are coming, since their divorce has brought out the worst in them--often with Kaylie in the middle. In order to distract her parents from fighting Kaylie invites Austin to dinner with them. Austin sees this as a more significant event than Kaylie intended and shows up in a suit with a bouquet of roses for Kaylie's mom. And knowing that Kaylie's dad hates him, he studies Alex's old baseball videos on YouTube so he has plenty to talk about with him. Austin ends up winning over both of her parents by the end of the meal, and he even has Alex thinking about the couple's future from a marketing standpoint. Kaylie is unhappy, because she just wanted a peaceful dinner--not a business dinner. When Austin tells Kaylie that he loves her when he drops her off at her room, Kaylie freaks out. They say goodnight and Kaylie tells Kelly that since she's never said "I love you" to anyone that it kind of freaks her out, especially with her parent's divorce going on. Kelly reminds Kaylie that just because Austin said "I love you" doesn't mean that the two are going to be getting married and having kids anytime soon, and calms Kaylie down.

Meanwhile, Payson finally gets Lauren to go see a doctor about her fainting spells. Lauren insists they use a doctor away from the USATC so it will remain confidential--she even uses a fake ID to book the appointment. It turns out that Lauren has an irregular heart beat, which Lauren lies about to Payson, telling her it's just a potassium deficiency. Payson calls the doctor to get the truth and then freaks out on Lauren for lying to her. Lauren assures her that tons of people have irregular heart beats and arecompletely fine. Payson is also sad because she blew offlunch with her father to go to the doctor's appointment with Lauren, but she makes it up to him by having him over to the dorm for dinner. He finally tells her that the family has decided to move back to Minnesota and that she will be staying at Kaylie's house until the Olympics. Payson's crushed that they didn't involve her in the decision at all, and Lauren points out later that it's about time they did something for the good of the family, since they've been putting Payson firstfor so many years. Payson realizes that she's being childish and admits that since she'll be heading off to college after the Olympics that it makes no sense for her family to stay inBoulder, CO. Lauren offers for Payson to stay at her house instead of Kaylie's, since they haven't really been hanging out with Kaylie much since she and Kelly became training partners.

Kelly's mother, Sheila,comes into town for the event and even though she's no longer Kelly's agent she's still acting like one instead of "just a mother". Kelly is upset and embarrassed when she finds out that Sheila coerced Coach Mac into staying at his house instead of a hotel and wants to cook him dinner. Sheila sees it as a way to get him to make Kelly the captain of the Olympic team, but Coach Mac sees right through it and invites Jordan to dinner, too, as a buffer since she doesn't have any family coming to the event. Sheila talks about Kelly's accomplishments through the whole dinner, much to the chagrin of Kelly and Jordan, and even mistakenly credits one of Jordan's medals to Kelly. After dinner Sheila corners Coach Mac and tells him that she can make him rich with endorsement deals if he makes Kelly the captain, but Coach Mac refuses to let anyone bribe him.

The exhibition goes well with all of the girls performing their routines flawlessly. Coach Mac thanks them for their hard work and reminds them that starting tomorrow he'll go back to being a hard-ass coach. 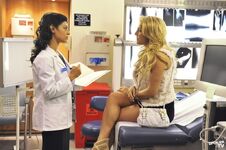 Add a photo to this gallery
Retrieved from "https://makeitorbreakit.fandom.com/wiki/Growing_Pains?oldid=6281"
Community content is available under CC-BY-SA unless otherwise noted.